Docker has become an essential tool in my daily life as a developer. From my first experiences, I have tried to include it in my projects, and over time I have managed to use it incrementally in the following ways:

Although docker-compose and docker-machine certainly help in all these ways, as the infrastructure grows both horizontally and vertically you will need to start thinking in terms of herd/cluster of servers, and the process will grow in complexity if you do not have specific tools for this purpose.

The solution proposed by Docker to solve this problem is called Swarm.

What is Docker Swarm?

Swarm is a Docker functionality used for orchestration of service clusters, which helps in distribution and management of dockerized systems on multi-host infrastructures. To use it you do not need more than the docker engine installed, since it's natively included from version 1.12. Some of it's benefits are:

Next I will make a walk-through on the configuration of a Swarm and deployment of a micro-services application on a 3-server infrastructure.

Prerequisites
To follow this step-by-step, you should start from a host with the main docker tools already installed (docker, docker-compose and docker-machine). I will be using an Ubuntu host, although the same can be achieved on Windows, Mac or other Linux distros, with just minor changes. It is also required to have Virtualbox installed for the creation of virtual machines.

I will try to focus on the commands referring specifically to Docker Swarm, so a basic notion of the mentioned tools is also recommended.

The first step to get a Swarm is the creation and provision of the machines that will serve as nodes for the cluster. In our case we are going to use docker-machine to provision 3 virtualbox machines in our host, but it is important to stress that this is not necessary for the creation of a Swarm. It's actually enough to have hosts that can communicate with each other through the ports that docker require (for example, different EC2 machines in AWS).

Note we have created a machine named manager. This constitutes one of the main definitions of Docker Swarm:

At least one of the nodes of a Swarm will have the Manager role, while the others will be Workers.

The Manager node will be the entrypoint for all the operations we do with the Swarm. It is worth mentioning that the Manager nodes also function as Workers.

Once created, we confirm the operation and check the status of the nodes executing

Creation of the Swarm

The next step is to initialize the Swarm from the manager node and subscribe the workers.

The --advertise-addr flag specifies the address that the Workers will use to register to the Swarm. Here we can choose the best address depending on the environment, it could be a private or public one. Here we will use the one docker-machine gave us (192.168.99.100).

Copy the command. If we need to get it back later, we can run one of these two commands (always from the manager), depending on whether we want to subscribe a Worker or a Manager

Once we have Swarm created in our Manager node, we should now register the Worker nodes.

And we will run the command obtained previously, exactly as we copied it

Once we repeat these two steps for each of the Workers, we will be able to verify our Swarm by reconnecting to the Manager (with docker-machine) and running

If everything worked fine, we will get a view of all the nodes that make up our cluster, indicating which is the Manager (Leader) and the status of each one.

At this point we have created the Swarm, composed of 3 nodes, one of them Manager and the other Workers. As I mentioned earlier, the Manager will be the node from which we will operate on the cluster, so we connect to it

We are ready now to deploy our Stack! But before doing so, let's review a bit of the new terminology introduced by Swarm:

Although Docker allows the creation of Swarm Services manually, here we will focus creating them using YML Stack files (similar to docker-compose vs docker run)

For our example, let's take the classic voting app from dockersamples, which consists of 5 services (some properties were removed for simplicity):

As you can see, a docker-stack.yml is very similar to a traditional docker-compose.yml. The main difference is the addition of the deploy element, which is used by Docker to customize the deployment options for our Services in the context of a Swarm.

In our example we only use a few deploy options, but it is worth diving in the documentation since here lies the greatest power of Swarm.

To deploy our Stack in the Swarm, we will run the following command:

The last argument is the name of the Stack, which will serve as a prefix for all Services and for use in certain commands.

From this moment, Swarm will begin the deployment, creating a Task for each one of the replicas of our Services, which will end up being simply a container in one of the available nodes.

The deploy process may take some time to complete, depending on the size of the Stack. Swarm offers several commands for monitoring, such as (always connected to the Manager):

Here we can see the number of replicas started for each Service. We can see some of them are not up yet.

What's interesting here is that we can see in which node each task is running, besides any error that we may have.

View the log of a particular Service (composed of all of it's replicas):

You probably noticed one Service in the stack called visualizer that was not part of our application. This component exposes a web page with a graphic representation of the Swarm, updated in real-time, together with relevant details of each Task. 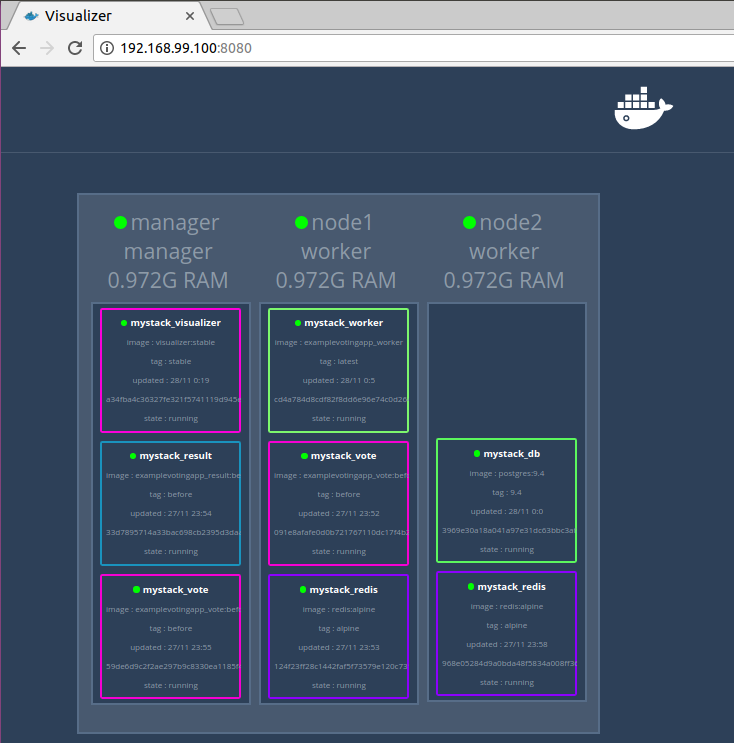 If you stopped to look at the address bar of the previous image, you may be wondering how that url ends up showing the content of the visualizer Service.

Swarm offers two alternative strategies to resolve access to Services from the outside world. We will cover the simplest form, which is called Routing Mesh and works as follows:

Before explaining any further, open your browser and go to http://192.168.99.100:5000/ (if you haven't already done so) and contemplate a shimmering Voting app running inside the Swarm!

So, what has just happened here?

We can verify the Load Balancing feature refreshing our vote page a few times and checking the container where it's being served from.

Docker Swarm offers this and much more regarding container networking on distributed infrastructures, you can dive in the documentation to learn more.

The configuration and implementation of a Docker Swarm turned out to be a very straight-forward experience, guided by excellent documentation, which allowed configuring a complex infrastructure, with advanced management, monitoring and troubleshooting capabilities without having in-depth knowledge of server management, networks configuration, security, etc...

Without having tried alternative products (such as Kubernetes) yet, I definitely recommend getting into Docker Swarm to kickoff / expand your devops skills.

On future posts, I'll expand on more advanced topics, such as:

Leave me a comment telling me which ones interest you the most!