The organization & the conference

This was the biggest conference I’ve ever attended. There was 2300 registered people. 5 days of talks. More than 13 tracks in parallel every hour. Everything was in big scale.
One thing that called my attention was the average age of the attendees; I’m used to see young people in the agile conferences in south america. But here, it’s really different; most of the people were around 40/50 and even more. So I understood this conference and the US agile culture about software is in a later stage than in South America. And this is pretty interesting because you will find people who have been working with agile practices for more than 10 years. Even in the government there are a lot of projects working that way. So I think it is time to see agile software development as the "classic" way to develop software and not as the "new" way. Another weird thing for me is that the conference is designed for you to miss things. There is a lot of things going on at same time, beside the talks, you have a coaching clinic, lighting talks, TDD workshops, space jam, companies lounges with activities, boost, and more. So, I think it’s designed to cover all needs, but it’s impossible not to miss anything you are interested on. For a guy like me, who don’t like to miss anything, it was hard to be relaxed.

The conference is about to start! This is the welcome talk.

My top 5 ideas from the top 5 talks

Awesome super problems by LuKe Hohmann.
Luke showed the collaborative, social, and serious games that have their roots in the agile community and have blossomed into multidimensional frameworks that are being used by agilists around the world to solve awesome superproblems. He shared his experience with the City of San Jose and their annual games over the past 3-4 years and how they were able to involve more community member perspectives in budgeting decisions. He also talked about the Los Altos School District and their experience with games to make difficult decisions about over-crowded classrooms - and again, including more people into the decision. They also presented a non-profit organization, Every Voice Engaged, which is open to work all around the world, for free, solving community problems.

Six Rules for Change by Esther Derby.
From this talk I took two things. The first one was this phrase: "don’t force to accept people they are wrong". It’s basic but strong and clear. Instead, just move on to solve the problem. And then encourage you to shift your language to: “This was the best solution we had at that time.” or “This served us well when” or similar. The other thing was the similarity I found between what she was talking about changing organizations, and programming. She concluded: “Big change feels like an existential threat. Small changes allow for learning” and then, “Insert at least 3 ideas (but not too many). Measure, evaluate, adjust”; sounds a lot to TDD right?

Retrospectives: Moving From A Subjective To An Objective World by Prateek Singh.
I took from this talk just one idea: to show metrics on the retrospective and find an explanation of the different patterns; like for example see a chart of your commits over time and understand the distributions.

Individuals, Interactions and Improvisation by Jessie Shternshus.
Jessie is an agile consultant and improv comedian who noticed parallels between the Agile Manifesto and the key principles of improv. Both disciplines have a common goal, working software & creating a funny play, both are focused on collaboration with customers (audience), and because of this collaboration and feedback from customer/audience this both require it’s members to respond well to change. If you have been in an improv show, you may listen the audience shouting out a movie genre, a funny constrain, etc… Well, those are the features requests. 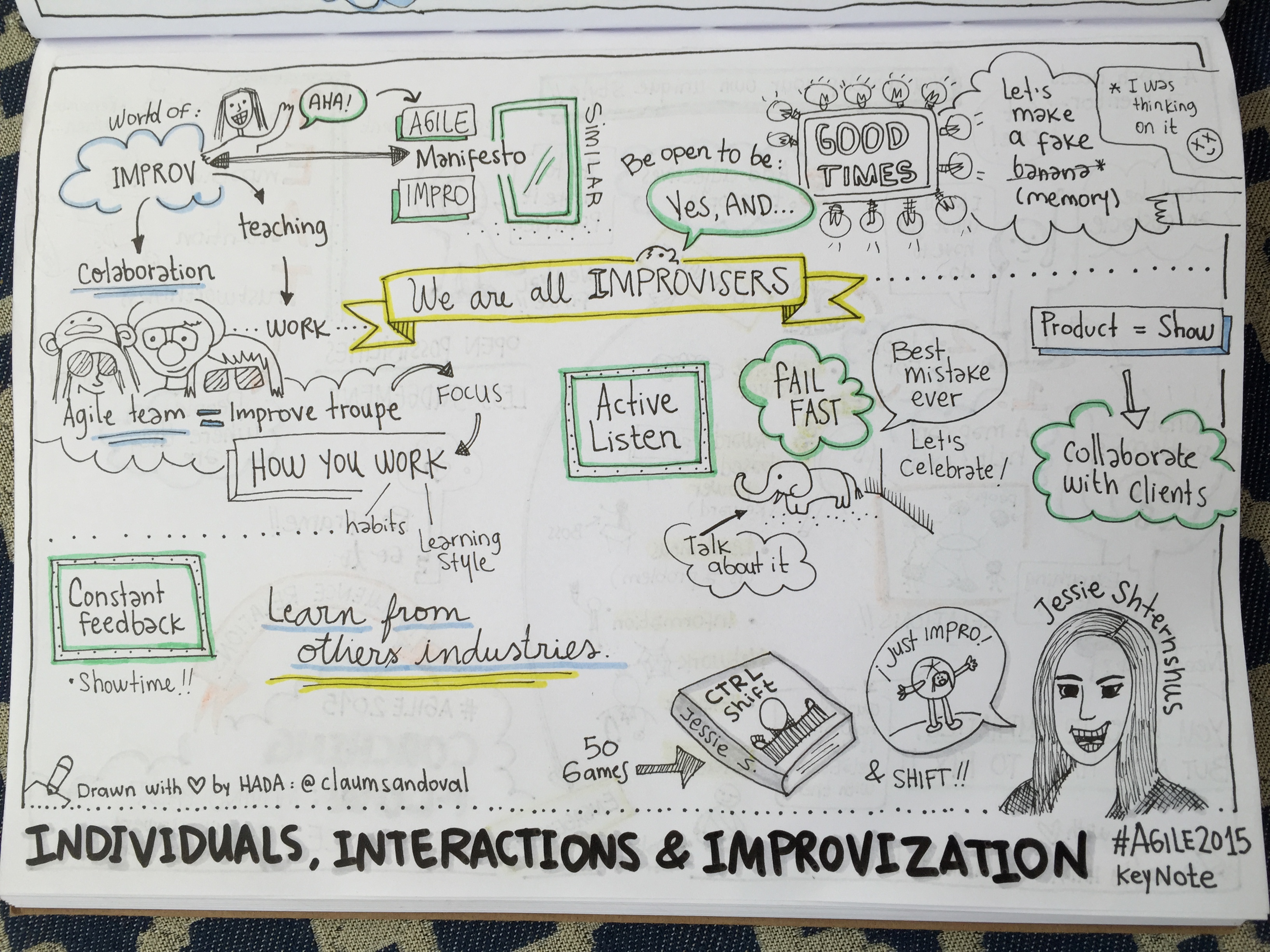 A graphic summary of the talk by Claudia Sandoval (@claumsandoval)

Emotional Intelligence in Leadership by Judith Mills.
From this talk I also took this 3 main ideas:

You will find most of the presentations here if you are interested: https://agile2015.sched.org/

Jeff Patton is one of my favorite famous people in the agile world. And this time I had the opportunity to talk a little more with him. Once you do it, you can easily see he is a modest guy with a lot of knowledge. We were talking about his mona lisa example of how to develop iteratively and incrementally, and my example of the bull fighting by Picasso inspired on the previous one. After talking with him, I decided to write a more detailed post about this ideas.
I also attended to his talk, about story mapping, and one thing that was awesome was that he give the talk without any presentation. Instead he choose to draw in sticky notes everything while he was speaking. Awesome! and very graphical.

My talk was called “Lean Sales Up” and it was oriented to all who are worried about the gap existing between sales and execution of an agile project. Bringing the concepts and principles of lean model to sales, we had created a practice which integrates the pre-sales phase with the traditional agile development cycle. Unlike the traditional pre-sales practices, ours helps to add value to the customer beginning at the conception stage; promoting closing the deal, while at the same time making the development team happier. This talk was a consequence of an experience report[*] I have to write in order to be accepted in the conference as speaker.
Regarding the time I had to give the talk, my experience was really great. I wasn’t nervous during the talk (obviously I was nervous before). At the end I felt comfortable. There wasn’t too much people considering the amount of conference attendees (mine was around 30 people). I had half an hour, so I needed to be pretty clear and go directly to the point. The time was enough. I printed several copies of my experience report, so at the end I offered a printed copy and it turned out to be a good idea because a lot of people asked for one; so I suppose people were interested in that topic. 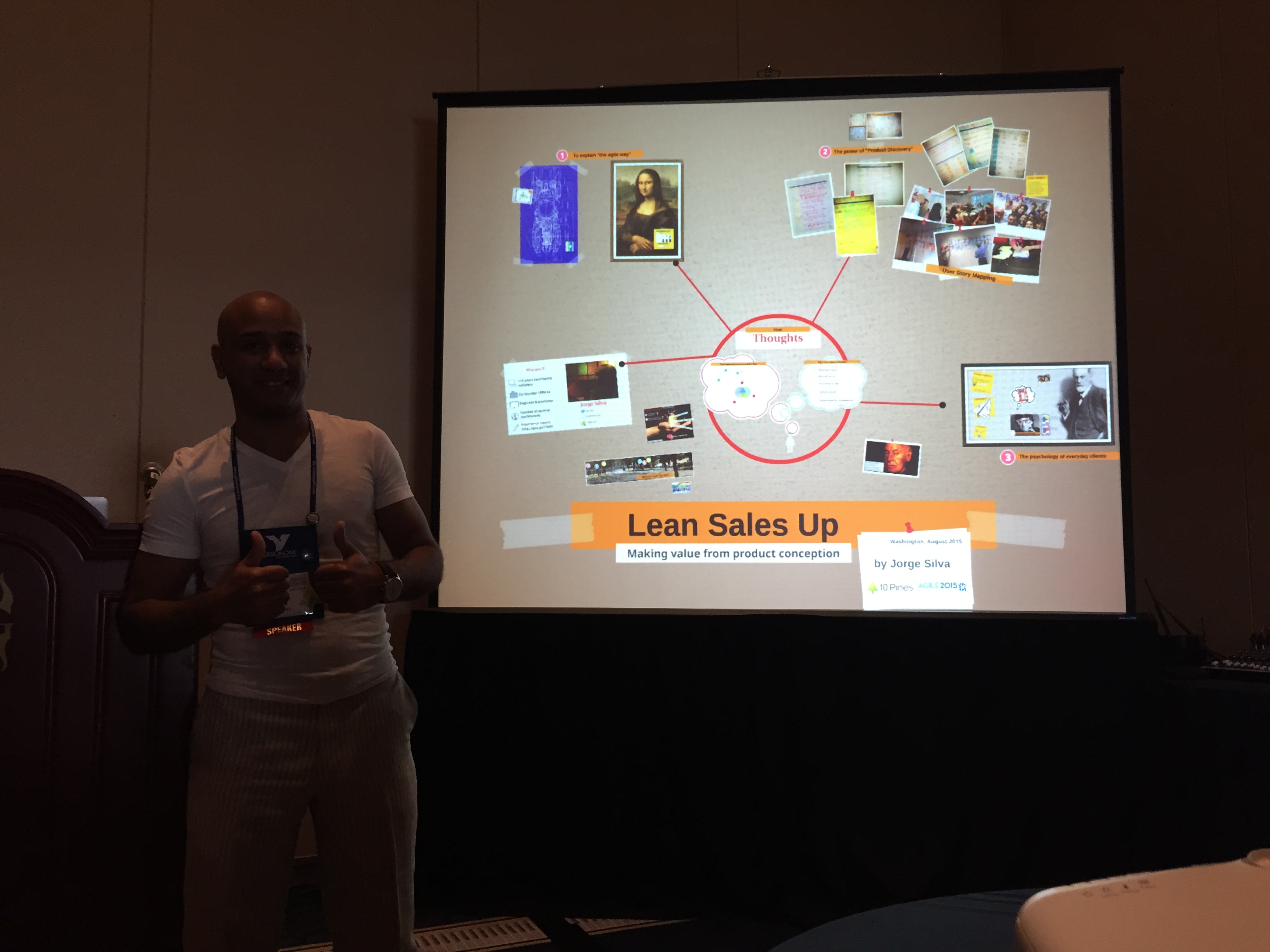 This is me about to start my talk

Here you can find the published experience report:
http://www.agilealliance.org/files/5814/3691/4983/LeanSalesUp-MakingValueFromProductConception.pdf

and here my presentation of the talk:
http://prezi.com/bqpkwk3zlwls 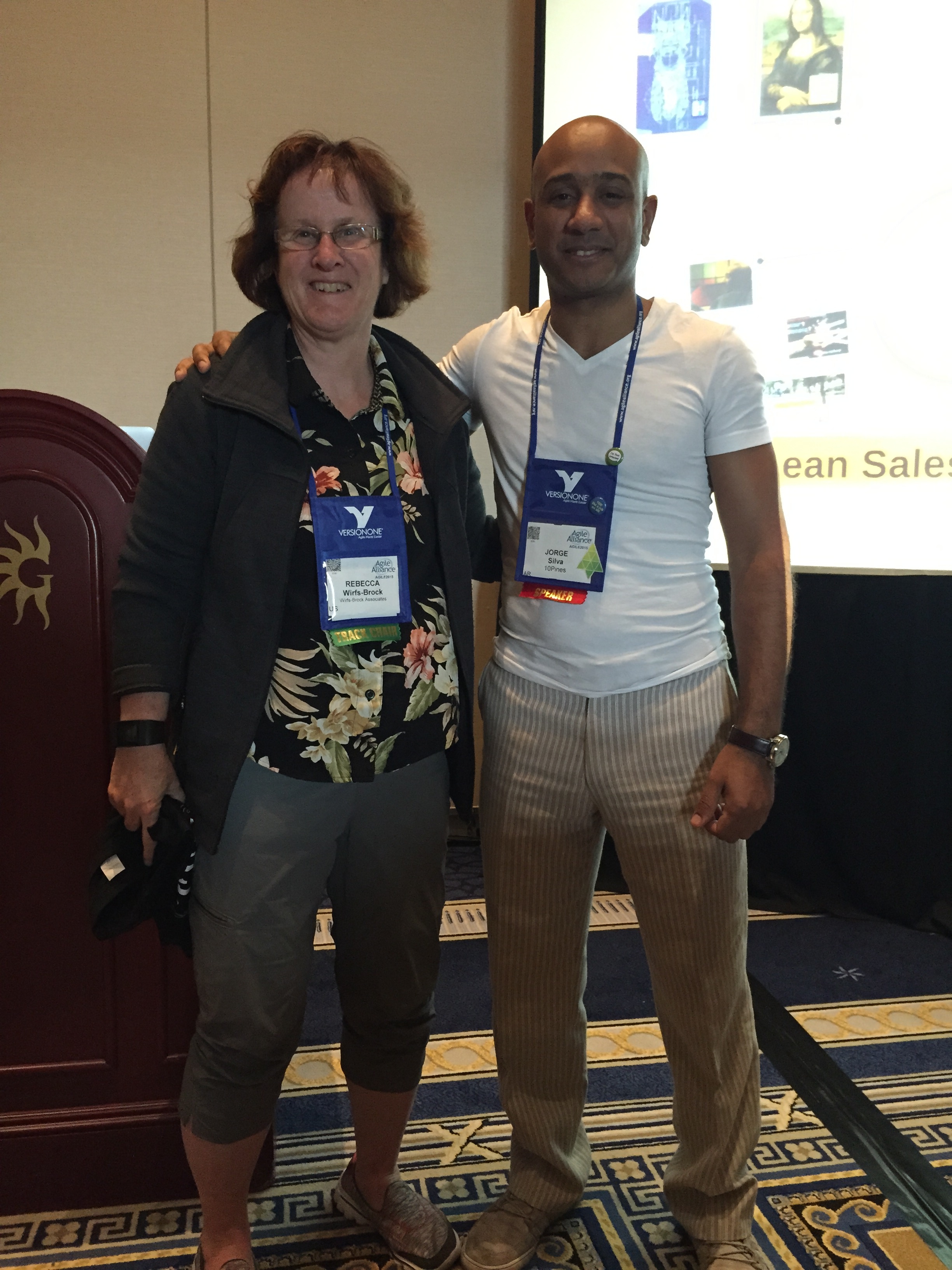 I had the chance of spending time with lot of latino guys, mainly from the latin-america agile community. And I think this was a huge difference regards my experience. But I think we lack of previous organization; we could have been more productive if we could organized ourselves a little more. So for example, in a sort of retrospective and thinking in the future US conferences we could explore the following things:
share hotel rooms. Speakers have free room and can add an additional person for a very low fare. So we could share rooms saving as much a ticket plane from Buenos Aires to New York.
Commercial Missions: if we take all the companies together, we could organize commercial mission with the Argentine embassy for our companies
Co-Speaker: to be a speaker here is really hard. You don’t have the fluid language, the audience is more critic, you are far away of your comfort zone. So, you could minimize this by co-speaking with other guy. You can low the tension and the pression if you speak with a partner.
Share your experience with newbies or first attendees.
We could be more present in the conference, for example using all the same t-shirt, or proposing some king of side activity.
The idea is to show to the world we have a lot of experience and we are also pretty good at agile. 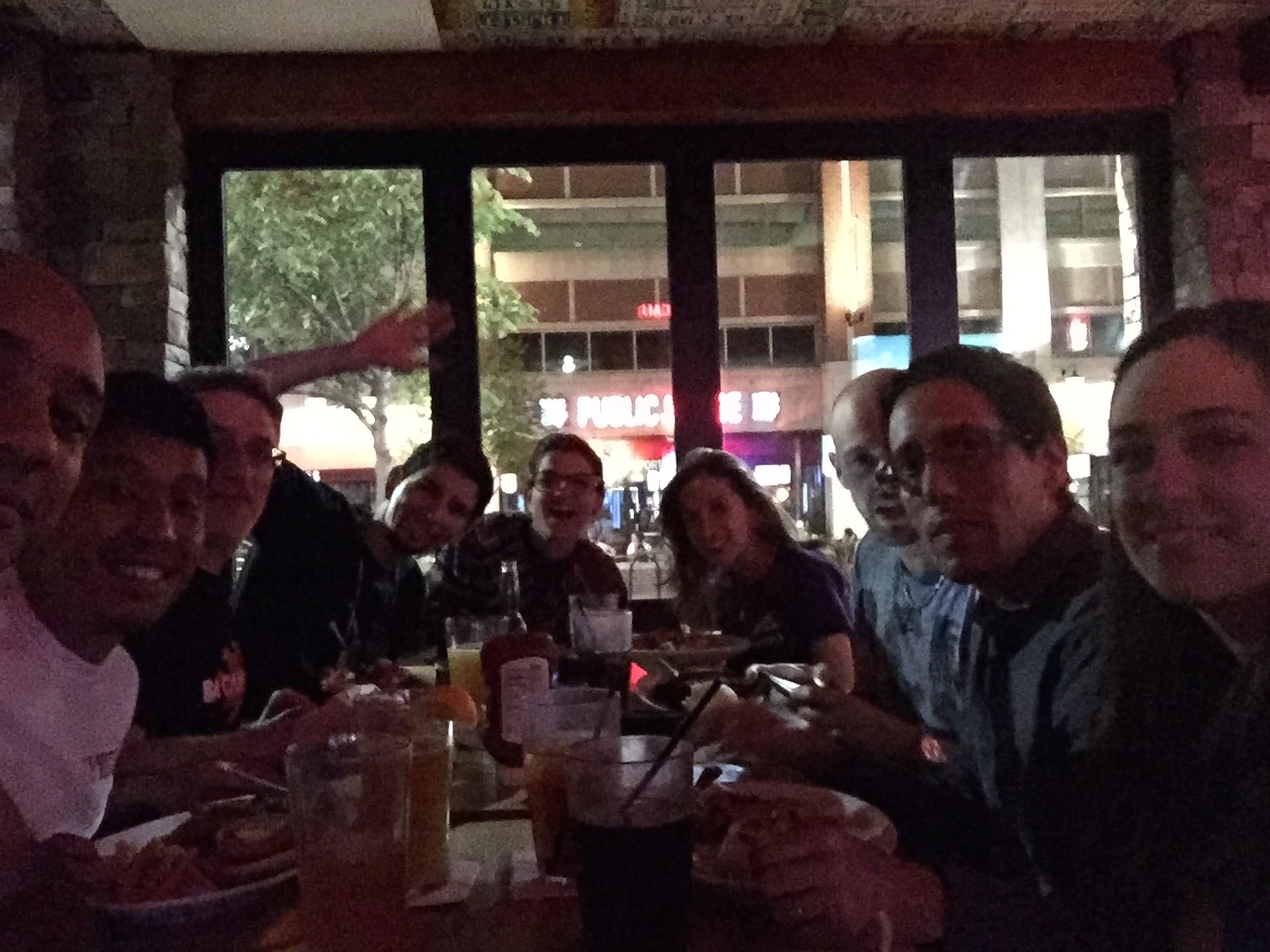 The latino community having dinner

I think it was a really good experience, you can learn a lot in different levels. And I think for me was a really interesting experience to another perspective of how can be a conference. I feel now more mature about speaking and attending at international conferences.

I've decided to write down guidelines to introduce yourself and getting to know the other person, avoiding typical mistakes.

Three Months have passed since I started working in 10 Pines as a participant of the apprenticeship program. Although we covered different topics and technologies, one of the things that has touched me