On my first week at 10Pines, a co-worker asked me why women don’t choose to study computer science as much as they did in the 70’s or 80’s. I didn’t know what to say. Honestly, I wasn’t sure why I had chosen it myself. But from then on, I couldn’t stop thinking about it.

The difference between the amount of men and women who decide to pursue a career in computer science does not go unnoticed...

What makes a girl pick a profession like software development and why another one does not even consider it?

A little bit of herstory

There was not always a lack of women in our industry. Did you know the first software programmer was a woman? Her name was Ada Lovelace, an English mathematician and writer who, on the 19th century, made an algorithm for Babbage’s Analytical Engine to compute Bernoulli numbers. That is considered the first published algorithm ever specifically tailored for implementation on a computer. Later on history the programming language ADA was created and named on her honor. 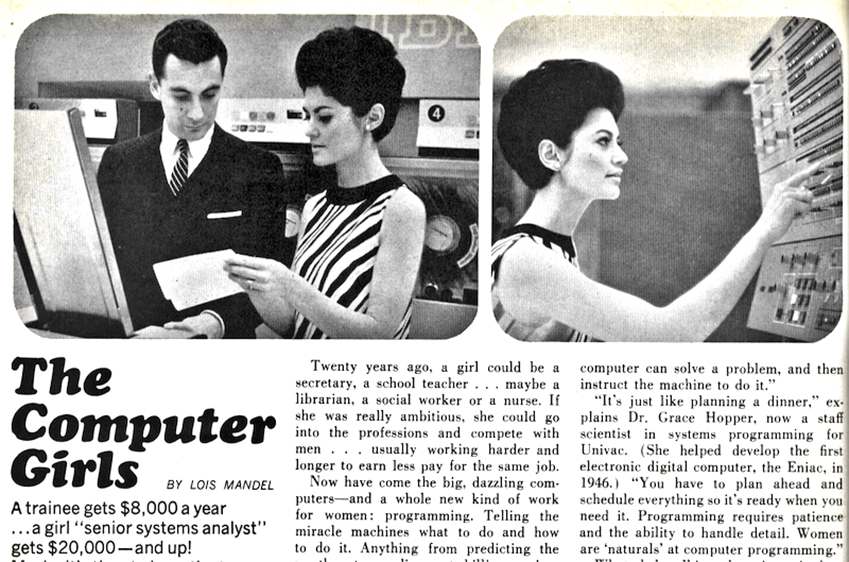 In the 40’s, during World War II, women were hired by the militaries to solve calculations that would improve the accuracy of the weapons. They started to be not only the users but also the programmers of computers.

Grace Hopper, a United States Navy Admiral, was one of the first programmers of the Harvard Mark I and the one who invented one of the first compilers. She believed that a programming language based on English was possible. Her compiler converted English terms into machine code understood by computers. Her ideas led to the development of programming languages like MATH-MATIC, FLOW-MATIC and COBOL.

From then on, software development was considered a “women’s job”, since it was believed it was an activity that didn’t require a lot of intelligence. Men, on the other hand, specialized in hardware. That’s why during the 70’s and 80’s the amount of women pursuing careers in computer science was at its peak.

It was not until the gold rush on Silicon Valley, brought by the progress in computer software development during the 80’s, that men started focusing on software development and men like Bill Gates and Steve Jobs got all the fame with their innovative operative systems and became the “heroes”.

And of course pop culture caught up immediately:

People from inside and outside the industry started to believe that computers were just for a reduced group of men that could not socialize with women. It eventually got to a point where companies would actually use such stereotype as an excuse for not hiring more women for the tech area.

So how did all of this contribute to the way women nowadays see female and male software developers?

In my case, even though knowing how a computer works always caught my attention, I had never thought of being a software developer until my cousin, who was already studying to become one, encouraged me to follow her steps. I wasn’t sure if it was the right career for me and when I started telling others about this possibility, a lot of people doubted about how long I was going to endure because computers weren’t “my thing”, and let’s not forget the fact that I was going to be surrounded by “nerds”. But since I love proving people wrong, I didn’t care about any of that.

Unfortunately, this is not what happens to most girls. The lack of encouragement received from their peers, bad sources of information and believing that they are not good enough for a specific career will drag them away from this profession.

I needed to know what the rest of my fellow female developers thought about this and how the rest of the women see us and what ideas they have about our job. So I decided to take matters into my own hands.

I made two surveys, one for women with a degree or currently studying a career on computer science and another one for those who have graduated or are studying a career on a different industry.
For the former, I managed to get the answers of 30 argentinian developers (co-workers, classmates and colleagues) between the ages of 21 and 35.

The outcome was illuminating...

Not to my surprise, almost 86% hadn’t gone to trade school, and only 25% knew a female developer. Most of them thought that developers in general needed to be extremely intelligent and good with math, and that men in particular were introverts and the classes were easier for them. However, after a while they realized that it was not necessarily true. There were people who did found it easier and others that needed to make an effort but that was not gender related.

And it was not that boys were smarter, they just got more confident at an earlier stage.

What did catch my attention is that about 70% used the computer a lot when they were younger and technology had always attracted them.

Although it was just a few, some of them were even into programming since they were kids because they were influenced by a family member that had that profession. Others had friends studying on the subject those days, and finding out what it was all about got them interested. Most of them had been encouraged to pursue a career on engineering or related to computers since they were young. “When I was younger I was always using my computer at home” or “I’ve always found computers interesting” are things that I recurrently read in their answers.

On the other hand, women who didn’t choose a career related to computer science, had not been to trade school as well, and 56% said they knew what software developing was. However, when they had to explain it, most of them believed that developers just work with numbers, algorithms, databases or fixing computers.

Only 12% thought of being a developer. The rest believed they wouldn’t like it, either because they are not good with numbers, do not get along with technology or think it would be really complicated and they are not smart enough. According to their answers, they were encouraged to continue their studies and have an academic formation but never in a particular career.

So… where are they?

After everything I’ve read and debated about this issue, I’ve come to the conclusion that there’s not just one particular reason why women don’t tend to choose these careers.

Sexism is definitely one of them. Since we are kids, we are taught that gender defines us and therefore there are certain careers that women should try to pursue. The ones related to computers are not contemplated, so we rarely have them as an option.

There is also lack of information of what software developing is about and having the wrong idea about our profession may not incline other women towards it.

Another thing could be how people in general think this is an incredibly difficult activity and that you need to be extremely smart, so they don’t believe they are made for it.

Also, self confidence is quite a big influencer and is related to what I’ve just mentioned. In my experience, women tend to not have a high opinion of themselves and their intelligence than men, so we think more than once when taking a risk- in this case, to go for something that “is not supposed to be for us”.

That is why I believe that if we want to see more girls interested in computer science we should first stop telling them that they should behave in a certain way and do lady-like activities, and let them know that they can be as good and smart as they aspire to be in anything they do

Like everything women accomplished through history, we can make this happen by letting them take over and embrace the spaces they deserve. 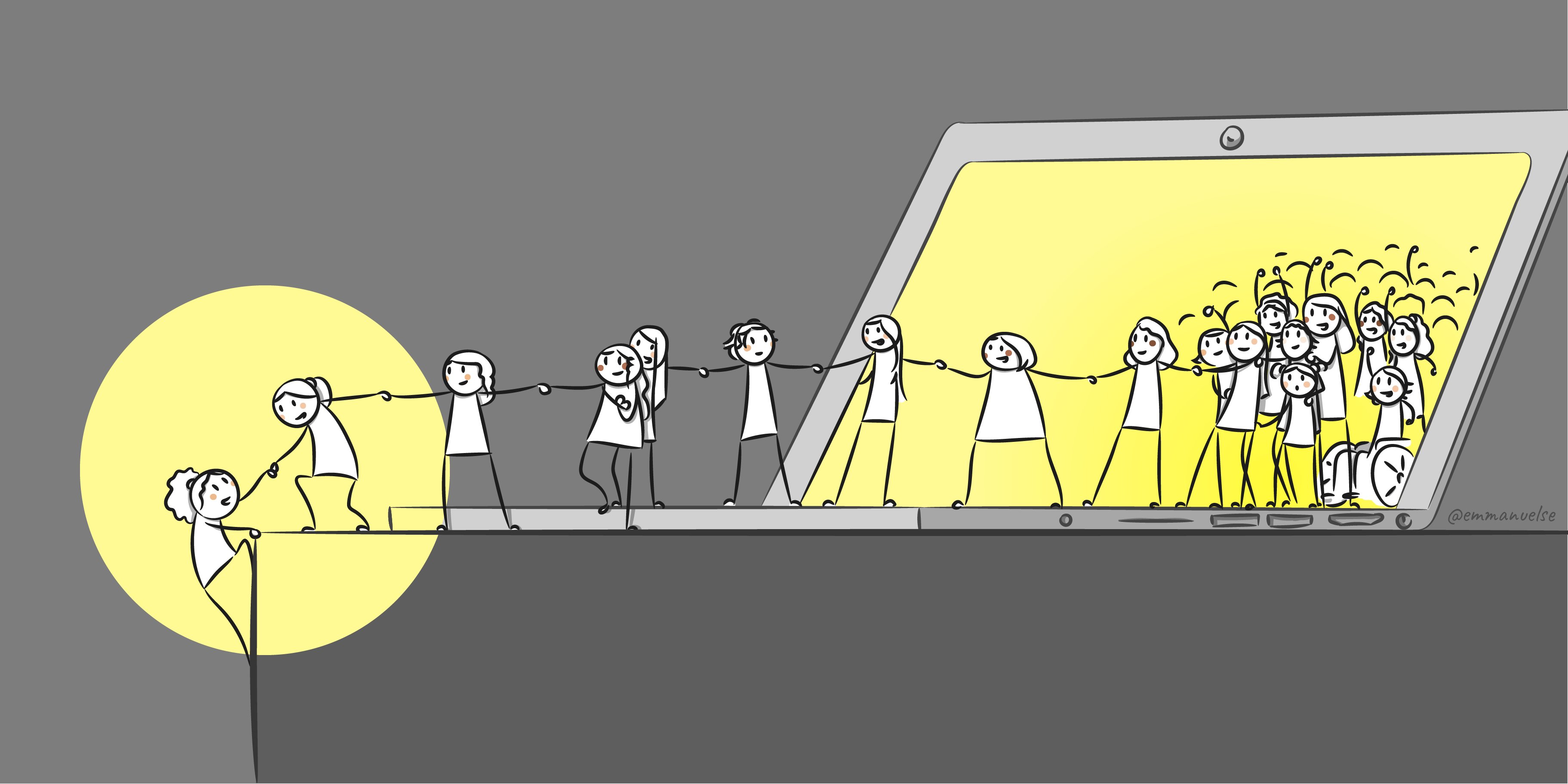 I've been requested to give an intensive, 5 days long course on a particular programming language directed to sysadmins. The intention of this post is to tell you about the steps and methodologies I used to build a training plan for it.

Working on a project with a lot of legacy code always leaves good lessons. This time I’ll present you what I like to call “evil defaults”, pieces of code that can do a lot of harm in any software project.

10Pines | Blog
—
Where the Female Developers at?
Share this